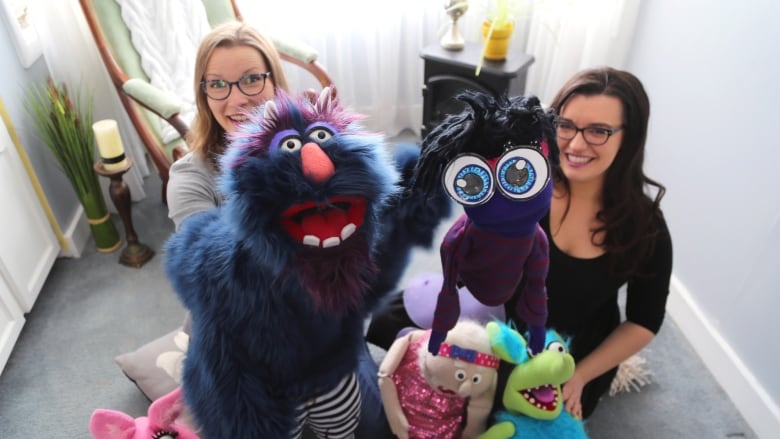 Anne Lebans and Rebecca Tremblay have built their careers on playing with puppets.

They lug large, colourful, googly-eyed characters all over the province and can quickly bring them to life through the art of puppetry.

The Fredericton women hope these dolls made of felt and fake fur will change the way people talk about mental illness among young people.

“It just brings out this joie-de-vivre,” said Tremblay.

They do this by bringing their puppets to different schools and public spaces. There, they give presentations and skits. Children also create their own puppet shows, which they eventually present to parents and peers.

For instance, in the fall they visited a Grade 2 class at Nackawic Elementary School, where students learned how to use puppets and created their own skits about inclusion and healthy relationships.

The goal is to teach kids about self-awareness and empowerment and to slow the increase in mental illness among adults.

And the puppet approach is catching on.

The Fredericton women have received requests from all across Canada and the United States to help tackle mental health problems among children.

“We grow up thinking that we have to search out there for the perfect person to fill our cup and make us feel loved,” said Tremblay, who spent many years struggling with low self-esteem.

“At the end of the day, the only person who can give us that true feeling of love is ourselves, through our own self-acceptance.”

The program has been endorsed by the Canadian Mental Health Association of New Brunswick, which describes it as a community resource that connects with kids.

“The positive mental health teachings and messages through the It’s OK to be Awesome puppets, aim to create and encourage positive self-talk and self-image to empower kids as they grow in life,” she said. “And we think that’s awesome.”

Mental illness not so uncommon

Since she was 12, Lebans said, she has fought bouts of depression that sneak into her life at unpredictable times.

“I thought there was something wrong with me, and I really became hard on myself and had a really harsh inner dialogue.”

“Everyone is going to struggle with being human.”

As she got older, Lebans learned she wasn’t alone.

Working as a life coach, she realized low self-esteem is a huge problem among adults, working professionals and even after retirement.

Lebans believes this is why the number of people who suffer from stress, anxiety and depression has skyrocketed.

In 2016, the Mental Health Commission of Canada, said one in five people experiences some form of mental illness before the age of 40.

After 40, that number increases to one in two Canadians.

And in 2013, the commission said more than 800,000 Canadian youth experienced significant mental health problems. Many of them didn’t receive treatment.

“Empowering the children with these tools earlier is going to help them have a much more happy, much more productive life, a much more lovely life,” Lebans said.

Tremblay, who’s also a certified teacher and has worked all around the world, says puppetry helps connect with children in a way that adults can’t.

Inside her classes, children who would typically give “yes” or “no” answers, contribute to full conversations and even make presentations with the help of puppets.

“Puppets are this magic key element that really connects with children,” said Tremblay, who discovered her love for puppets in university.

The duo also cater their puppet performances to different needs and address a variety of topics.

They work with military families living in New Brunswick and children whose parents have been deployed.

“A child will open up if she’s got a puppet on her hand and she wants to talk about her dad just being deployed, and she’s feeling sad,” Lebans said.

According to a Canadian Mental Health Association survey, more than half of Canadians consider anxiety and depression to be an “epidemic.”

That’s why, Tremblay and Lebans are also hoping to launch a television or web series to help children and adults tackle mental illness.

Eventually, they want to implement video curriculum in classrooms across New Brunswick.

“When you’re having fun you can learn so much better,” said Tremblay.