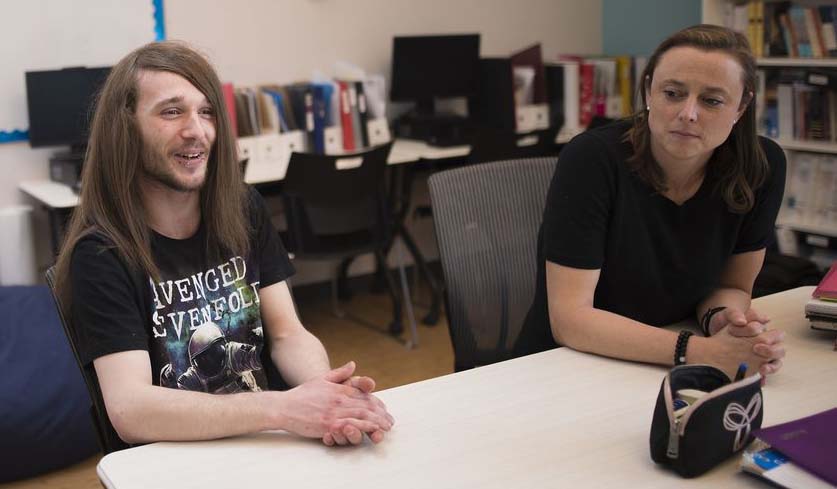 Jordan Fournier was not often far from his suburban Toronto classrooms, but he rarely ventured inside: He and his friends smoked and drank behind the building; stole from the local grocery store; and spent time getting “into a lot of bad stuff.”

His voice trailed off when asked about his home life. He lived with his mom until 16, but “things were rough” and he moved around, living with friends, he said.

He was 17 credits shy of graduating when the school kicked him out.

Over the last two years, though, Mr. Fournier has been inching closer to what he left behind.

At 23 years old, he will be a high-school graduate.

It’s high school graduation season, and Mr. Fournier’s journey to that stage is not just a story of personal redemption, but also puts the spotlight on an unusual program designed to help younger people living on the fringe, those who are in and out of homelessness or whose personal struggles impede their ability to complete secondary schooling.

Tucked in a corner of the 360Kids youth shelter in Richmond Hill, Ont., the iGrad classroom is a partnership between the centre and the local school district that offers a flexible program for at-risk students to earn their 30 high-school credits to graduate.

It also offers what educators are increasingly seeing as vital to help young people who grow up in stressful environments succeed academically: A caring adult to foster resilience and optimism.

On a recent Friday, students sat around a large desk in the centre of the iGrad classroom to do their school work, but mainly to speak with instructor, Sarah Strachan. She sees herself not just as a classroom teacher, but also as a guidance counsellor to many of those enrolled in the program.

Some of her students who are gay or suspected of being gay have been kicked out of their parents’ houses. Some have been involved in human trafficking. Some are addicted to heroin. Some are in households where their parents don’t pay attention to whether they’ve attended school. Others didn’t thrive in a traditional high school learning environment.

“I went down a path that I knew wasn’t where I wanted to be … and got lost along the way,” Mr. Fournier said of his own experience. “I wanted to finish school and actually do something with my life.”

One couple in the program have been living in their car or in shelters. “It’s very difficult to get them to come in and actually sit down and do work when they’re trying to figure out where they’re going to sleep that night,” Ms. Strachan said.

The program, now in its third year, gives students the flexibility to earn credits in their own time, unlike a more structured semestered schedule in high school. The shelter refers youth to the program – but lately, students will bring their friends who have also abandoned their high-school education. Students complete many of their courses online, and the classroom has computers and laptops they can use.

Ms. Strachan sends weekly e-mails or texts to all those enrolled to check-in on how they are doing.

“I feel like with these kids – and I’m not blaming anybody – but I feel like they kind of slipped through all the cracks and they didn’t maybe necessarily have enough people to sort of fight for them,” Ms. Strachan said. “And so I always try to really make sure that I keep going and going and going and going until it’s done. Kids really feel that I care when I do that, and they know that I’m invested in their success.”

Twenty-two students in iGrad have graduated since the program started and another nine are graduating this year. Further, more students are receiving course credits this year than in previous years.

Louise Sirisko, the director of education at the York Region District School Board, said the iGrad program has been so successful that she plans to look at how to expand it.

“There are some of our students whose personal narrative is causing such disengagement, their circumstances are so dire and so unique that we have to think creatively and meet kids where they’re at,” Ms. Sirisko said.

Imani Douglas, 18, would have been graduating high school this year had she attended classes. She said that she got into trouble at school and was moved to various high schools before arriving at iGrad. She found a place, she said, where a “teacher generally cares, not just about school, but she cares about us.”

Ms. Douglas had seven credits when she first started two years ago. She has 13 so far.

“It really bothers me sometimes because I know that I could be done school if I stayed focused. At the same time, I can’t live in the past. I’m doing what I need to do now,” she said. “I’m just happy that I got on the path that I need to be on.”

Mr. Fournier hopes to study to become an electrician. His living situation continues to be fluid. But his focus has been a high-school diploma.

“It’s about damn time,” he said about graduating this month.

Then he became more reflective of Ms. Strachan, and the program that helped him get to that point: “I had someone supporting me and wanting me to do well and that gave me a lot of motivation and inspiration.”