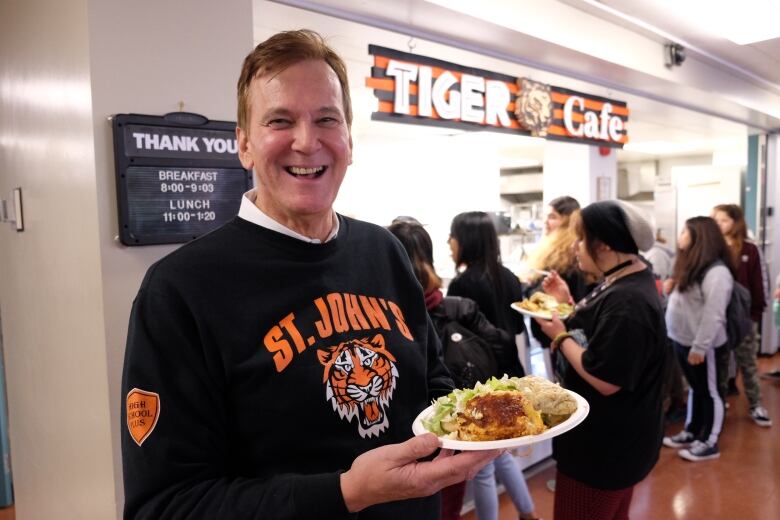 St. John’s Principal Doug Taylor said providing students with affordable food options at the school has changed the culture within the school.

They say there’s no such thing as a free lunch, but at St. John’s High School in Winnipeg, you can come pretty close.

The school has launched a new lunch program, where the maximum price students will pay for a plate of food is $2.50.

“It’s changing the culture of the school. It’s making people feel that they have hope, that they can do whatever their dreams are.”

The North End school began serving up the reduced-price meals at the start of the school year, but officially launched the program on Friday.

After retrofitting its cafeteria with new convection ovens, refrigeration systems, a state-of-the-art computer system and new tables and chairs, the school’s Tiger Cafe was born.

Students can enjoy a free breakfast every day of the week and get the daily lunch special for $2.50.

“Today’s breakfast would be pancakes,” Taylor said. “We’ve had bacon, eggs — it’s remarkable what they are getting.”

A lunch special might include lemon chicken, mashed potatoes and vegetables, for example, Taylor said.

Individual items like muffins, yogurt parfaits and sandwiches range from 50 cents to $1.50.

The program, which is estimated to cost $400,000 per year, is being paid for by a donation from the Walter and Maria Schroeder Foundation.

Walter Schroeder — a Winnipeg philanthropist who made his fortune founding the global credit rating agency DBRS — and his wife committed to donating more than $10 million last year to help underprivileged students at three Winnipeg high schools. St. John’s got the largest portion of the funds.

About half of St. John’s students come from single-parent homes, and the median household income in the area is just $40,000.

St. John’s High School has received about $1 million this year so far. The donation has paid for school equipment, scholarships, and now the lunch program.

“The foundation has tried quite a few things in the school, from bursaries and scholarships to food hampers on the weekend, and community services workers,” said Sig Schroeder, Walter’s brother, who runs the school cafeteria program for the foundation.

He describes the lunch program as the “next phase” for the foundation, which he says hopes to continue the program as long as possible.

Many students are able to access the lunches for free, and Taylor said the plan is to offer free lunch for up to 200 students who need it.

The school also hopes to expand the program into the evenings, with students in the after-class homework club getting a free dinner before going home, or having their parents join them for a meal.

“We just believe that if you’re making a difference in the community it’s not one thing that does it — it’s a puzzle, and it’s putting together all the pieces,” said Taylor.

“Food is a major piece — food security in a community is major.”

Students say they now look forward to seeing the daily specials, which are posted at the start of each week.

“Before we had overpriced, unhealthy meals, but this year it drastically improved,” said Jazmin Calumba, a Grade 12 student.

On Friday, the coveted lasagna special was served up for just $1. Prices for other menu items have dropped too, Calumba noted.

Cheska Macusi, also in Grade 12, said in the past the cafeteria was hardly ever used by students.

“Last year it was a desert.… Nobody came in,” she said.

It’s been busier this year, thanks to food that’s “affordable and perfect for the students.”

That was, in fact, one of the goals of the program, Taylor said.

“Our donor had the idea that we should be eating as a family, and so all of our tables now in the cafeteria are round tables,” he said.

“We all eat the same thing, staff and students. It’s really a communal gathering.”

Taylor said in the past students would either leave the school during lunch — often to find fast food — or go hungry.

“[The lunch program] is making a difference. Students are staying here, students are eating,” he said.