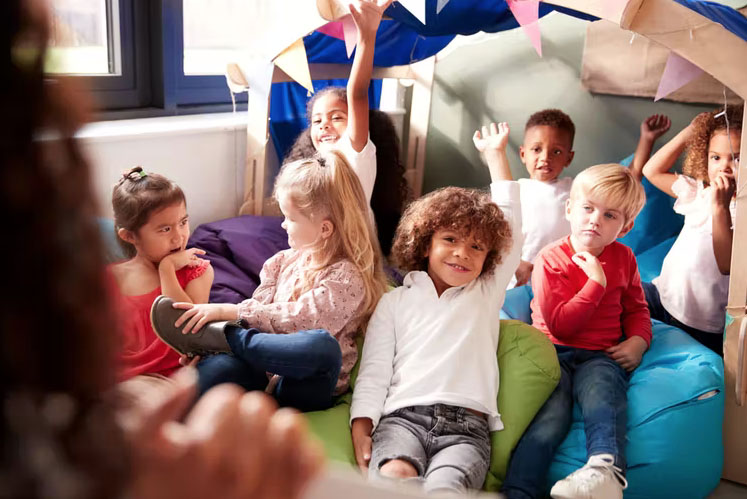 Québec’s Lab-École project, highly publicized since its launch in 2017, has big ambitions. It aims to transform the province’s schools along three lines: physical environment, healthy lifestyles and nutrition.

The redesigned schools will become real living environments that foster learning and motivate teachers and staff working with young people.

However, tomorrow’s schools should look beyond aesthetic appeal and seek to maximize children’s vision. For people whose sight is not impaired, 80 per cent of learning is achieved using the eyes, which makes vision essential to many children’s development and academic success.

Thus, school environments should be redesigned to make the most of students’ visual abilities.

To define an ideal classroom (or workplace), we must take into account factors like the spatial organization of the class; lighting levels and contrasts that result from these elements; the use of technology such as interactive boards (also called whiteboards) and electronic tablets.

Visual demand — the effort our eyes need to adapt to tasks required by particular learning activities — must also be considered.

Most teaching spaces are rectangular, with windows placed on one side or facing the teacher’s board. Windows are rarely equipped with blinds and more often with curtains. The lighting, which comes from fluorescent tubes, cannot be modulated by area or intensity.

This type of lighting is problematic for several reasons, according to preliminary research by Benoît Frenette, an optometrist and expert in visual ergonomics, which was conducted in collaboration with optometry students at the Université de Montréal.

In a scenario where all curtains are open and the lights are on, two-thirds of students’ desks are immersed in an environment that is too bright for recommended levels of light illumination — a measure called lux — with 500 to 700 lux on the whiteboard, 300 to 500 lux on the work surface.

When the lights are turned off and the curtains remain open, only half of the students receive adequate lighting for school work — those sitting in the middle and back of the classroom. Students at the front of the classroom rarely benefit from lighting that is conducive to learning.

When the curtains are closed and the lights are off, it is obvious that the lighting is largely insufficient on the child’s work surface. However, this is a situation that students often experience because in many classes, it is the only way to make the interactive board visible, with good contrasts.

However, this optimal scenario for the interactive board deprives students of exposure to daylight, which can lead to myopia in children. In addition, there may be effects on their ability to learn and on their mood.

See better and far away

In other countries, exposure to daylight is maximized. In China, for example, classrooms are built with almost entirely glazed exterior walls, knowing that exposure to high levels of light is preferable and also promotes learning.

Denmark has incorporated outdoor exposure into core curriculum in a way that has garnered attention and classes are also held outside in Great Britain.

Learning can also be influenced by many other elements in the classroom that have an impact on vision. Perspective and field of view should not be restricted, for example. Windows should be large enough to allow distant vision and physical barriers should be minimized to allow an open horizon.

It has been established that 70 per cent of classroom time activities require the use of sight. This means that if a child has an eye co-ordination problem, which is the case for 15 to 20 per cent of primary school-age children, then he or she quickly develops symptoms of fatigue and migraine. The work will likely be abandoned.

Often, hyperactivity will be cited as a reason when the problem is actually a logical response to a visual problem in an environment that is inadequate for learning.

The increasing use of electronic tablets is another challenge for vision. The working distance with the tablet is reduced compared to other devices. The eyes therefore work harder and can develop symptoms of fatigue. Lighting is also important here: reflections on the tablet can affect the visibility of the text or images — and therefore learning.

The same issues raised in the classroom are also encountered in traditional workplaces. Imagine cubicles lit by fluorescent tubes, without access to daylight and without a wide horizon to look at. Visual stress and symptoms such as dry eyes then appear in both the worker and the student. Uncorrected vision problems can significantly reduce workers’ productivity.

How can the situation be improved? First, encourage open-air classes with wide horizons and neutral visual demand. There should be many windows, which will lead to an increase in exposure to daylight.

Blinds to modulate the light input are preferred. On the other hand, opaque curtains should be banned. Artificial lighting must be able to be modulated in zones. The front part of the classroom, often poorly served in current scenarios, could be illuminated differently from the middle or rear part of the room.

The interactive board must be placed in a strategic location that is visible to all, without any distorting effect if seen from the side. The lighting above the board should be controlled independently in order to avoid putting the classroom in darkness, either completely or partially.

The same recipe should apply in our workplaces. Providing open, well-lit areas is a winning approach. The lighting of the workstation must be adjustable. It is also important to avoid glare on the screen or harmful backlighting near the workstation. Permitting frequent breaks — one to two minutes every 30 to 45 minutes — will help productivity.

Finally, it is essential to wear glasses or contact lenses prescribed by a professional. And eye co-ordination problems should be treated with exercises or other appropriate methods.

Québec is fortunate to be able to rethink the design of its schools. It will be even more successful if it does so according to the visual needs of its children.