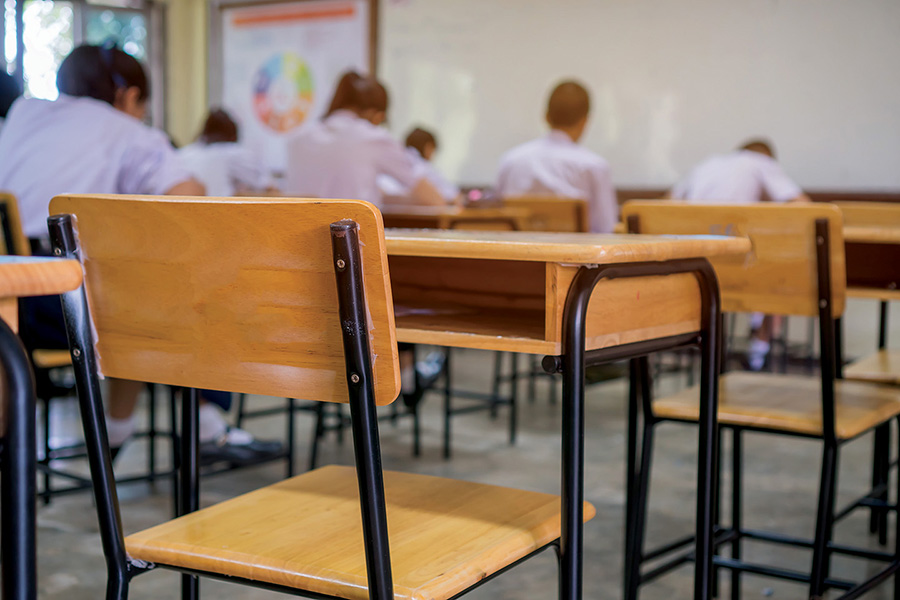 Does student absenteeism impact their final grade?  If so, to what degree?  Is there a difference depending on course, grade or level?  How do we measure and quantify this?  These were some of the questions that I wrestled with as a school leader…..and students came to my aid!

In my role as a vice principal at Ajax High School in the Durham District School Board, I had begun to seriously consider these questions and began conversations with staff regarding insights and solutions.  It was unanimous that we all felt there was a correlation, but how to measure and quantify this was the issue?  Enter grade 12 student Will Edwards!  Will was a student in the grade 12 university level Data Management course, and he chose to complete his final Independent Study Unit (ISU) on this very topic.  The study was designed to determine if a correlation did exist between attendance and the final grade, and if so, how significant was that correlation.  Furthermore, if a correlation did exist, what explanation could be provided for the results and why they were significant.

In cooperation with the school board, data was gathered from 4 consenting secondary schools.  In this initial study only data from grades 9 and 10 was utilized.  All data was combined and remained anonymous within the data set so as to not create a ranking of the schools.  The data was arranged into different tables based on course, stream (academic or applied) and grade. “Using the calculations of average, standard deviation, median, mode, maximum, minimum, and correlation coefficient and the graphs, the effect of attendance on final grade by stream was studied.” (Edwards)

Some of the findings:

One of the limitations of the study was the absence of data from grades 11 and 12 which would have significantly increased the volume of data being analyzed, however, the findings were significant and informed many discussions with students, parents and educators.

When I became the principal of Anderson Collegiate in Whitby, I mentioned this study to Duncan McIntyre, our Head of Mathematics. Duncan also taught the MDM4U course and agreed that we needed to further test the impact of absenteeism on final marks, this time including the senior grades.

Approximately 5 years after the study by Will Edwards another study was undertaken by Anderson students, again in cooperation with the board and 2 anonymous schools.  This study did not separate by course stream, with findings being given instead by grade. A negative correlation was again found to exist between attendance and final grade.

Some of the findings:

In this study the grade 10 students indicated the more significant impact of attendance on the final grade, but in all cases the impact remained in the 1% range.  This discrepancy from the first study may have been due to a smaller sample size, or simply attributed to a different cohort of students.  Additional data was reported in this study specific to select courses, with the majority indicating a negative correlation of just below the 1% level.  The exceptions were grade 12 university level science (-1.4824) and physics (-1.6131).  Senior level sciences indicated the largest negative slope, followed by senior level mathematics.

This study acknowledged that attendance was not the only factor when it came to the final grade.  The course, teacher, level of understanding and the level of initiative, as well as attendance affect the outcome for the final grade. “Attendance is just one key part of succeeding in high school, but it is a fairly large one, being that for every class absent almost 1% is being dropped.”

How do we as school leaders respond to this information?  How can we reduce absenteeism and the resulting loss of marks?  How do we reengage those who are on that downward spiral and prevent others from joining them?  How do we begin to understand what is causing this?

In my first placement as a vice principal we would identify students on a monthly basis who were hitting a specific target of absences for the designated period of time.  They were required to attend a 75 minute session with myself and a member of the Guidance staff where we questioned them about the reason(s) for their poor attendance and provided information and supports in an effort to reengage them.  The overwhelming reason for poor attendance was an inability to see the relevance of what they were learning to their lives. Coupled with this, we determined that less than 2% of this group participated on any team, played in the band, participated in the drama productions or were a member of any club.  If they were also not being academically successful, then what was connecting them to school?  This was our at-risk group and we were not being successful in connecting with them!

Some students had selected or been placed at a course level beyond their capabilities, leading to frustration, absenteeism and sliding marks.  The importance of the course selection process was shared with parents and students at Parent Information Nights, with specific reference to the cost of absenteeism.  Our Guidance staff worked diligently to ensure each student was appropriately placed.

Finding a way to connect these previously disengaged students to the school was another challenge the school leadership team readily accepted.  If they were not sport/drama/music-able, what else could connect them to the school?  Through the development of a central narrative for the school based on human rights, we found a way to engage many of these students and their friends in meaningful advocacy and events. Attendance began to steadily improve, as did marks!

In addition, we found that suspensions were also a significant contributor to lost marks and through the process of reengaging many of those at-risk students, plus other initiatives, we were able to reduce suspensions by 51% over the course of 4 years, recovering a significant amount of previously lost marks.

Where are marks being lost in your school?  What can you do to mitigate this situation?  How can you reverse the trend?

AUTHOR BIO:
John Morrison has been recognized as One of Canada’s Outstanding Principals, was in school leadership at the secondary level for 12 years, and the Co-ordinator of Leadership Programs for York University’s Faculty of Education for 5 years.  He has recently published “The IT Factor: Discover and Unleash Your Own Unique Leadership Potential”