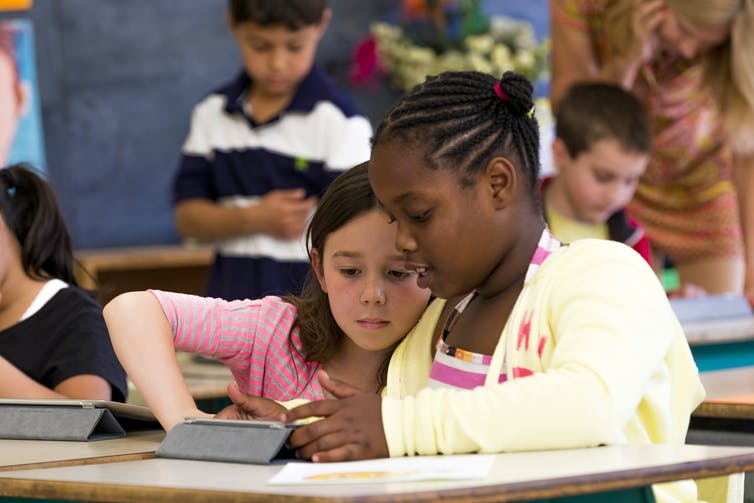 A video game like Minecraft in schools might trouble some parents. As a Canada research chair in technologies and education, my hope is both parents and educators take the time to learn about how using Minecraft at school could be beneficial.

Firstly, parents and teachers are right to ask questions about video gaming, particularly given sometimes conflicting messages about its impact. Some researchers caution about the possible impacts of child and youth exposure to violence or problems of gaming addiction or screen saturation, while others say fears may be exaggerated and it’s a matter of balance.

Parents’ potential skepticism of Minecraft is understandable, given its immense appeal among youngsters. It is one of the most popular video games of all time, with more than 150 million copies sold.

But I’ve learned through my research that many are largely unaware of the enormous educational potential of Minecraft. Many people also don’t know Minecraft Education Edition was released in the fall of 2016 and this version has been rapidly catching on at schools.

Since 2013, American and Swedish schools have been systematically integrating Minecraft into their schools, and it is being used around the world to teach science, urban planning and foreign languages. Masses of educational applications and experiences using Minecraft are available on online sites and forums.

Creativity, student engagement and collaboration between users are some of the aptitudes known to be developed through gameplay.Thierry Karsenti, Author provided

In Montréal, a number of schools joined a contest in which students use Minecraft to reproduce historic sites and events in celebration of the city’s 375th anniversary, called Mission 375. With my team at the University of Montréal, we felt it important to investigate the educational potential of Minecraft in order to provide a deeper understanding of the impacts on young learners.

So why all the interest in video games? Compelling research exists about the benefits of gaming for learning. Educational technology researchers have found that video games capture children’s attention and provide particularly favorable conditions for learning and have shown positive effects on cognitive, affective and psychomotor functioning.

When players are fully engaged in a gaming task, they enter what psychologist Mihaly Csikszentmihalyi calls the “flow state,” also known as “the zone,” a state highly conducive to learning.

While becoming deeply engrossed in gaming is sometimes depicited in a negative light or only associated with addiction, in fact this state can be harnessed to support or advance learning goals. For example, in this task-focused state, players are highly receptive to learning embedded in the game scenario. Creativity, student engagement and collaboration between users are just some of the aptitudes that are known to be developed through gameplay.

In addition, video games can help today’s youngsters cope with a future world requiring more and more digital literacy. In other words, they will need 21st century skills.

My team and I adopted an exploratory research design to highlight the main uses of Minecraft in a school setting and to identify any benefits of using Minecraft at school. We developed a program called Minecraft Master where students had to complete more than 40 different tasks. Tasks were closely linked to the school curriculum; for example, students have to create a navigable map, making use of language, mathematics and spatial design, something we asked them to do with Minecraft.

Students were encouraged to progress through levels.Tierry Karsenti, Author provided

We formed a partnership with one Montréal school. Participation was open to 118 Grade 3 to 6 students in an after-school program based on computers available. Registration took place during recess, on a first-come-first-served basis and parental consent was compulsory. Most of the students took four blocks of six weeks of Minecraft during the school year (an equivalent of about six months).

With the support of a program facilitator, students worked individually and in teams to digitally build structures such as impressive houses, a soccer stadium, a space ship, a railroad track to the Titanic and the Titanic itself.

The educational impacts we found were encouraging. The students showed a heightened motivation towards school, stronger computer skills, greater problem-solving skills, expanded reading and writing skills, a development in creativity and autonomy and increased collaboration with classmates.

The results of the studies we conducted confirm that Minecraft has real educational value. Notably, gaming allowed the students to fully engage in activities that were both educational and fun.

However, it is important to understand that the use of Minecraft in our context was planned, supported and purposeful. This structure is crucial for a successful educational use of the game. Without such boundaries, students might not want to stop playing and learning advantages could be wasted.

Technologies, games and other “screen-related” activities can be a fun experience for students. But it is important to balance screen time with other activities that are essential for students’ development such as physically active play, reading, etc. Both parents and teachers can help students find this balance by working together on some rules about technology use.

Therefore, it is incumbent on both parents and teachers to structure the use of video games such as Minecraft to ensure that they provide students with appropriate support for the use of educational technologies. Such supervision would allow them to fully benefit from the incredible potential of this game.