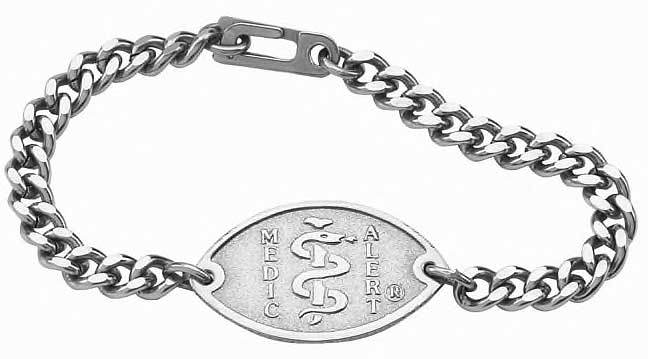 Details such as condition, medication and instructions can be shared with emergency responders

Medical bracelets can give first responders critical information about conditions from diabetes to allergies — and now — psychiatric issues.

A pilot project launches this week to expand MedicAlert — a service that gives authorities access to medical information — to youth in B.C. who have mental illnesses.

The accessories — usually a bracelet — have an identification number that is linked with medical history and notes the patient submits beforehand.

“Psychiatric issues often land people in crisis and, when they’re not at their best, it’s really hard for them to communicate what they need or what’s going to be helpful,” said Keli Anderson, CEO of the charity, Family Smart, which helps families navigate the mental health system.

The medical tags can include information about a condition the wearer has, medication they are taking or offer specific details like, “I have anxiety and panic attacks. Please speak to me in a calm voice,” or “I need space. Do not crowd me.”

The pilot project is operating out of B.C. Children’s Hospital, in partnership with Family Smart and MedicAlert.

The hope is to test out the bracelets on roughly 100 children and teens to see how the program can be expanded to other mental health agencies across the country.

Last year, the service was made available for children with autism. MedicAlert bracelets have also been used by seniors with Alzheimer’s, dementia or brain injuries in cities across Canada.

Anderson’s son, who is now 30, has bipolar disorder. She said having a medical bracelet would have really helped him while growing up.

As just one example, getting close to someone who is panicking may be comforting for some people. But for others, like her son, it can make the situation much worse.

“There were times that people did the things that don’t help him and actually escalate him,” she told CBC’s The Early Edition.

“Things go wrong really fast and then you’re further traumatizing people who already have a lot of trauma.”

Oftentimes in a crisis situation, it can be challenging to actually read the information on a bracelet but Anderson said simply wearing a medical bracelet can act as an alert that more information might be needed.

The other concern raised by some parents around the bracelets is that they will mark who has a mental illness, which could lead to more bullying.

“It really speaks to the stigma around mental health,” Anderson said.